Business conditions in the fasteners market appear to be churning along well over the past two months, according to the latest readings from FCH Sourcing Network's Fastener Distributor Index (FDI).

Released Thursday, the March FDI mark was nearly identical to February's, dipping 0.1 percentage points to 66.0. It was the third month in the past four that the FDI has been above 62.0 and shows a steadying in the market that is significantly improved from readings in the mid-50s as recent as November and October 2020. February's 62.1 reading was the FDI's best mark since July 2018.

For context, the FDI bottomed out at 40.0 in April 2020 amid the worst of the pandemic's business impacts on fastener suppliers. It returned to expansion territory (anything above 50.0) in September and has been in solid expansion territory since the start of this past Winter.

While the overall FDI reading was essentially unchanged, its Forward-Looking-Indicator — an average of distributor respondents' expectations for future fastener market conditions — broke its own one-month-old record with a new all-time high of 78.5 in March. That's up 4.6 points from February and shows that FDI survey respondents — comprised of North American fastener distributors — expect business conditions to remain favorable for at least the next six months. This comes despite continued concern over supply chain and pricing issues. The FLI has been in the 60s each month beginning with September 2020.

"Net, we believe March was another strong month for most fastener distributors relative to expectations, although supply seems to be more of an issue than demand currently.," Manthey commented. "Price increases from suppliers continue to flow through at an elevated rate/frequency, while delays in importing materials continue to cause headaches for many respondents. Feedback suggests lead times continue to extend, leaving many distributors unable to fully meet the very strong demand."

The March FDI showed that sales and month-to-month pricing saw considerable gains compared to February, while supplier deliveries and respondent inventories had notable declines — further evidence of a clearing backlog.

--Sales grew another 4.6 points from February to 90.6 after surged 26.2 points from January to February. It has shown major volatility in the last few months.

--Respondent inventories fell 7.3 points from February to 31.3. It had hovered between the mid-60s to mid-50s through most of 2020 but has fallen steadily since this past August.

--Customer inventories gained 3.1 points from February to 18.8 - showing that February's 15.7 may have been its bottoming out

--Month-to-month pricing jumped 7.5 points from February to 87.5 - it has climbed steadily since last Spring, up nearly 30 points since October 2020

Looking at expected activity levels over the next six months, sentiment grew even more positive in March:

--Only 6 percent of respondents expect lower activity over the next six months, compared to 3 percent to February

--6 percent expect activity to remain the same, compared to 14 percent in February 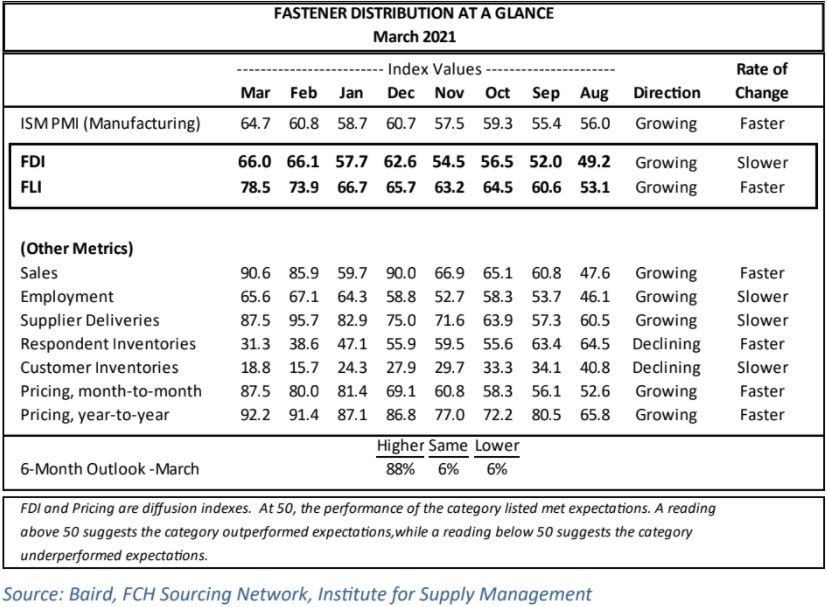