After two-straight months of gains, FCH Sourcing Network’s monthly Fastener Distributor Index (FDI) expectedly took a nosedive in March as impacts of the COVID-19 pandemic fully set in upon the industrial supply space.

The FDI — operated by FCH in partnership with R.W. Baird — showed that March registered a seasonally-adjusted reading of 44.4, sinking 8.6 percentage points from February's expansion reading of 53.0. The March reading ties the lowest mark in the FDI's nine-year history.

The FDI's forward-looking-indicator (FLI) — which measures distributor respondents' expectations for future fastener market conditions — took an even sharper fall in March from 48.9 in February to a new all-time low of 33.3, indicating widespread pessimism about selling conditions in the near future. January's FLI mark of 50.9 was the only expansion FLI reading since April 2019.

R.W. Baird Analyst David Manthey, CFA, noted that FDI respondent commentary showed widespread forecasting uncertainty, with most respondents hesitant to speculate on the direction of overall economic and business trends given the rapidly-evolving environment. He added that other respondents see a significant short-erm weakening in the economy, but a return to normal levels shortly thereafter.

In March's FDI, the seasonally-adjusted sales index plummeted 23.3 points from February to a mark of 33. 6, following a two-month gain of 20.0 points across January-February. In other March metrics:

--Employment decreased 21.2 points from February to 27.0, following an 8.5-point decline from January to February. Baird noted that the major decline is perhaps a sign of layoffs that have already occurred or are soon to occur in the fastener industry. No respondent noted employment levels were higher than seasonal expectations, while 46 percent characterized employment as below expectations — the highest such percentage in survey history.

--Respondent Inventories ticked up 0.6 points from February to 64.9;

--Month-to-Month pricing remained at a break-even 50.0; and
Year-to-Year pricing increased 1.9 points from February to 60.8 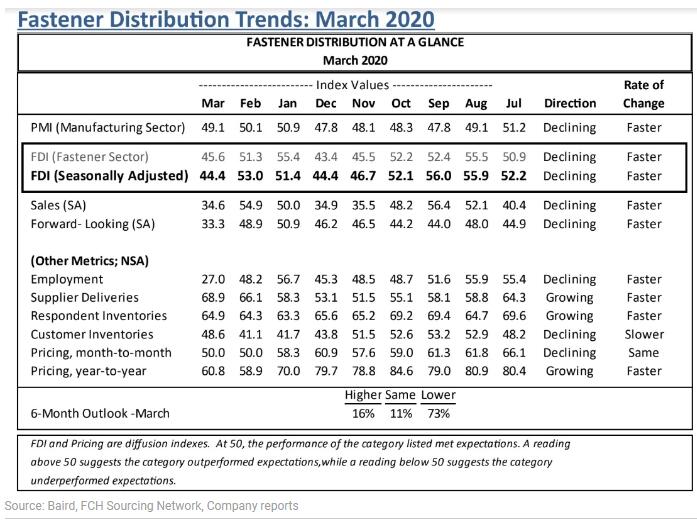 March's FDI survey asked a supplemental question on the impact of the economic shutdown, US-China trade relations and the potential for re-shoring of manufacturing to the US.