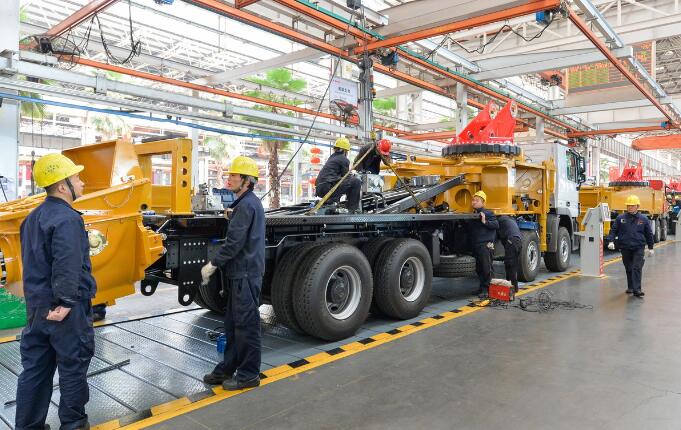 Sany Heavy Industry Co Ltd, based in Changsha, Hunan province, predicted its net profit attributable to shareholders could reach between 6.5 billion yuan ($945 million) and 7 billion yuan, an increase of 92 percent to 107 percent from the same period last year.

"The main driving force for Sany's future growth will remain the overseas markets, which is also the company's priority," Fortune Securities Analyst Huang Hongwei said in a research note.

The manufacturer said several products such as excavators, concrete mixers and cranes posted rapid sales growth while its profitability increased significantly in the year's first half.

"Sany's export target of excavators is to reach 10,000 units in 2019.Overall, the overseas excavator market is expected to maintain a growth rate of around 5 percent in the next few years, so the company anticipates good demand for its products in overseas markets," Huang said.

The company attributed the robust returns to rising infrastructure demand and the company's enhanced core competence.

Zoomlion Heavy Industry Science and Technology Co Ltd, which is also based in Changsha, estimated its net profit attributable to shareholders could reach a maximum of 2.7 billion yuan in the first half, up 212 percent year-on-year.

The growth was driven by strong demand from the real estate and infrastructure industries, and strict cost control by the company, Zoomlion said in a statement.

Xuzhou Construction Machinery Group said its January to June net income could hit between 2.1 billion and 2.4 billion yuan, an increase ranging from 90 percent to 117 percent.

The construction machinery manufacturing industry is a highly cyclical business.

In China, the industry was confronted with a recession between 2012 and 2016 because of a glut. After expanding over the past two years, growth in the industry began slowing down last year.

Zhang Cheng, an analyst with Huatai Securities, said the growth rate of companies related to infrastructure and real estate investment will be higher than others.

Global uncertainties will continue to have an impact on the industry and lead to an industrywide shakeout. Companies that are globally competitive are expected to post better than expected results, Zhang said. The life cycle of mechanical equipment is roughly between eight and 10 years.

China International Capital Corp said in a report that many owners would replace their old equipment with new machines this year. "The demand for excavator replacement would reach 140,000 units," the report said.