Clearance process at ports to be optimized 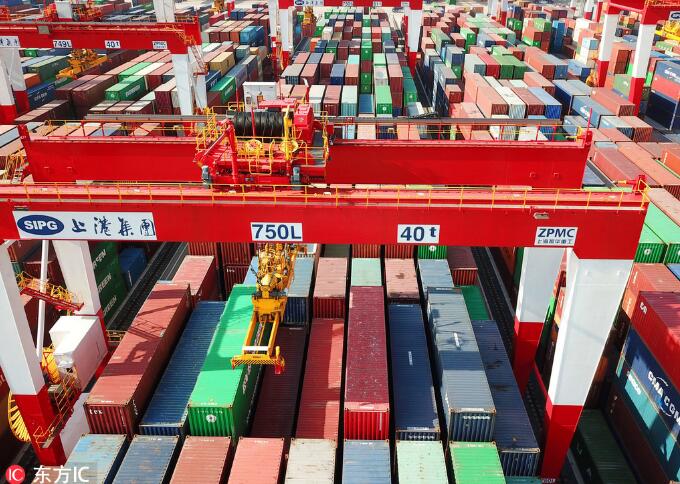 An aerial view of containers at the fourth phase of the Yangshan Deep-Water Port, the world's largest automated cargo terminal, in Shanghai, April 10, 2018. [Photo/IC]
China will further optimize the business environment in ports to spur cross-border trade, officials from the General Administration of Customs said on Wednesday.

Hu Wei, deputy director of the administration, said during a news briefing that continuous efforts to shorten the clearance process have yielded fruitful results.

The number of documents needed under the import and export regulations has been cut from 86 to 46, out of which 42 can be verified online, Hu said.

"By the end of this year, apart from certain confidential documents, all the documents required for imports and exports will be applied and processed online a year ahead of the schedule proposed by the State Council," he said.

Hu said improvements in the port business environment has boosted the volume of foreign trade, with steady growth seen in January to May, amid an optimizing trade structure.

"Tianjin saw annual trade volume rise 46.5 percent at its water transport port," he added, saying the dramatic growth was the result of the local government's efforts to improve the business environment at the ports.

"According to a report by the World Bank, in 2012, the average time needed for imports and exports in China was nine days and seven days, and it was relatively longer than those in developed countries," said Pan Helin, a senior researcher at public policy think tank Pangoal Institution, adding that longer time needed meant more risk, more uncertainty and higher cost.

Pan said in recent years the government has poured continuous efforts to facilitate trade and addressed it, from the Government Work Report in 2017 to the 20 measures to improve the business environment in ports announced in 2018.

"Such policies have largely increased the efficiency in clearances, optimized business environment and facilitated trade," he said.

Bai Ming, a senior researcher at the Chinese Academy of International Trade and Economic Cooperation, said to encourage companies to explore the international market, a good environment and political support is needed, such as the previous measures on export tax refunds and adjustments in value-added tax.