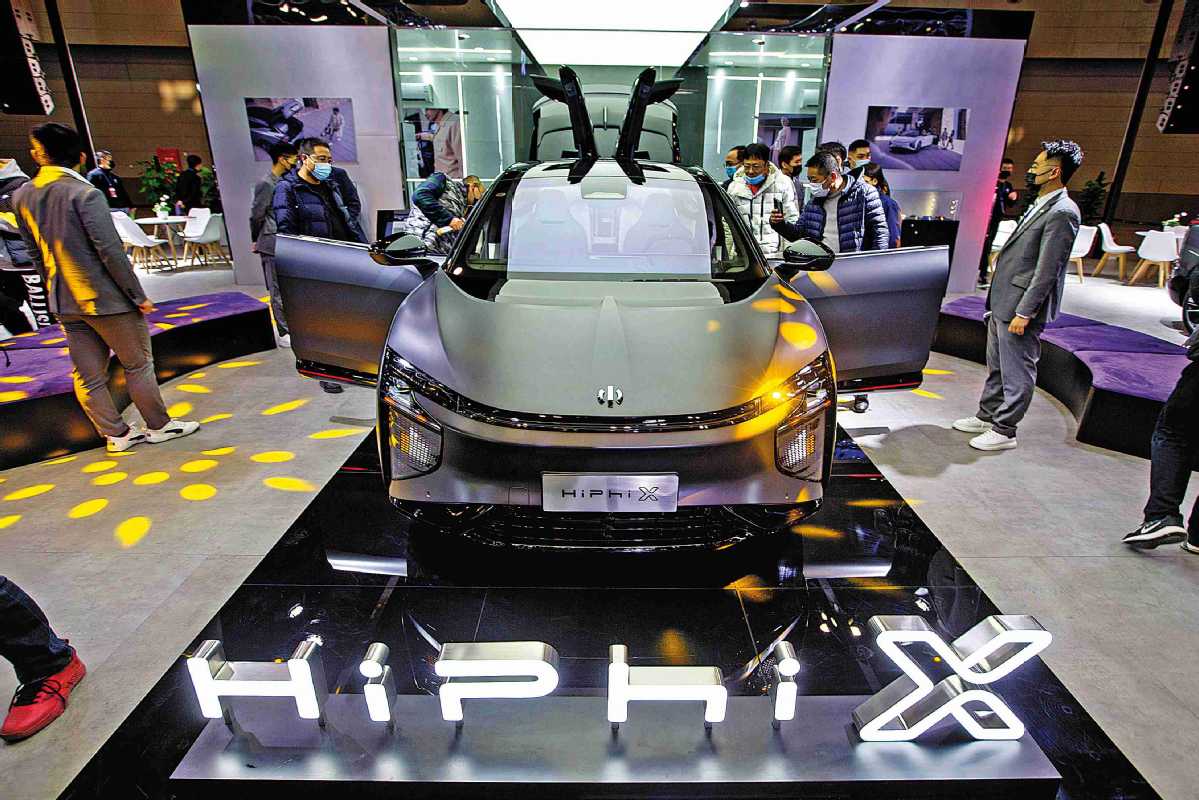 Electric cars and plug-in hybrids are expected to see record deliveries of 5 million units in China in 2022, as local marques and international brands vie to introduce more models into the market, said a top industry expert.

Ouyang Minggao, vice-president of think tank EV 100, said chip and battery shortages have been taken into consideration. "As far as demand is concerned, the figure would be even higher," said Ouyang, also a professor at Tsinghua University.

Deliveries this year, including both passenger vehicles, buses and trucks, could reach 3.3 million units, he said.

In the first 11 months this year, their sales reached 2.99 million units, according to the China Association of Automobile Manufacturers.

Ouyang said the surge in their popularity is the result of a combination of factors including technological progress in batteries.

BYD's blade-shaped batteries and CATL's cell-to-pack technology have been widely used in newly launched models, extending their driving mileages but cutting their costs.

He said a growing number of model choices, smart functions including driving-assist features, and the authorities' favorable policies are also helping drive sales.

"The effects of China's financial stimuli are fading away, as we can see that around 75 percent of those vehicles are sold to private car buyers," said Ouyang.

A total of 378,000 electric and plug-in hybrid passenger vehicles were sold in November, up 122.3 percent from the same period last year, according to the China Passenger Car Association.

The association said they accounted for over 20 percent of total passenger vehicle sales in the month.

In the first 11 months, deliveries of electric cars and plug-in hybrids reached 2.51 million units in the country, roughly 14 percent of total passenger vehicle sales in the same period.

Ouyang said the percentage would sit at 20 percent in 2022, which means every one out of five vehicles sold in the country will be an electric model or a plug-in hybrid. The figure was merely 5.8 percent in 2020.

There have emerged some popular brands. A total of 14 carmakers each sold over 10,000 vehicles in November, and three of them sold over 50,000 in the month.

The best-seller was BYD, which delivered over 90,000 vehicles in the month.

Tesla sold 52,859 units in November, the third month it had delivered over 50,000 units. Its Shanghai plant produced over 400,000 vehicles in the first 11 months. It was followed by Wuling, known for its popular stylish yet affordable minicars.

Four Chinese startups saw their sales hit 10,000 in November and they expect the trend to continue as the market heats up.

"In light of our strong order intake and users' rising acceptance of smart electric vehicles, we remain as enthusiastic as ever about our growth prospects," said Li Xiang, founder, chairman and CEO of Li Auto.

Ouyang said the competition will become fiercer as some international volume brands will start to roll out models in the segment from 2022.

So far China's market is uneven, with deliveries seen in the large, premium segment and the minicar segment.

Volkswagen sold 22,691 electric cars in China in November, accounting for over 60 percent of total deliveries of all international volume brands.

But many others have unveiled their plans. Japan's Nissan expects four out of 10 vehicles it sells in China to be electrified by 2026. It will build both vehicles and batteries in the country.

Another Japanese carmaker, Honda, is to launch 10 electric car models in China in five years as part of its global electrification campaign.

The first two models, which will be SUVs, will go on sale from early 2022 at its two joint ventures GAC Honda and Dongfeng Honda.

The increased number of offerings will further boost the popularity of their reception in the market. Ouyang expects sales of electric cars and plug-in hybrids in China to reach 7-9 million by 2025 and soar to 17-19 million by 2030.

He said he believes Chinese brands will continue their go-first advantage in electrification and digitalization including smart features.

"There is an estimate that Chinese brands will account for 60 percent of the new energy vehicle market by 2030, and I agree with it," said Ouyang.