Views :196 Recommendation: Votes:0 Discuss:0
While the FDI trended positive for a second straight month, its six-month outlook continued to slide amid supply chain and labor issues.

FCH Sourcing Network reported its Fastener Distributor Index (FDI) for the month of November on Dec. 6, led by second-straight month of improvement despite ongoing supply chain headaches, as survey responses from distributors shifted their focus toward labor issues.

Last month's FDI showed a reading of 57.6, up 1.5 percentage points from October. October and November have shown a solid rebound since the index hit a 12-month low of 54.2 in September. Any reading above 50.0 indicates market expansion, while anything below that indicates contraction.

The FDI has been in expansion territory each month since September 2020, most recently peaking at 61.8 this past May and has held in the mid-50s for the past three months.

Meanwhile, the index's Forward-Looking-Indicator (FLI) — an average of distributor respondents' expectations for future fastener market conditions — had a decline for a third straight month. November's FLI of 64.0 was down a 0.5 points from October, following a considerable five-point drop from September to October. While still in strong expansion territory, the FLI has sunk a concerning 19 points since August (73.0). The FLI was in the mid-to-high-70s throughout this past spring before falling to 65.3 in July. It rebounded nicely in August but has fallen since.

Only 36 percent of the FDI's survey respondents indicated they expect higher activity levels over the next six months compared to today, down significantly from a clear majority of 80 percent this past February and March.

The FLI has been at least in the 60s each month beginning with September 2020.

"Prior respondent commentary had been focused on container/material shortages and port backups but the focus notably shifted toward labor constraints this month," noted R.W. Baird analyst David Manthey, CFA, about the latest FDI readings. "Net, November largely saw a continuation of recent themes, including stronger demand than can be served, extended lead times, and raw material and labor shortages."

Of the FDI’s seven factoring indices besides the FLI, three saw month-to-month increases. They were led by the sales index, which soared 18.1 points from October to a November mark of 76.6, outpacing its recent high of 74.4 hit in July and reflecting strong demand. Also increasing was Supplier Deliveries, up 3.0 points from October, and Respondent Inventories, up 1.5 points.

Manthey noted that while FDI participants are still in the midst of dealing with supply chain issues involving freight delays, container shortages and shortages of imported material, labor seemed to be the biggest irritant cited by this months' surveyed distributors.

Here’s a sample of anonymous distributor comments from the FDI's November survey:

--“Slight slowdown, believe many orders have already been placed ahead of time-based on the current situation with material shortages, lead time, overseas port backlogs, etc. Hiring is tougher than ever, with very little replies on Help Wanted ads.”

--“A disappointing month due to limited human labor .... We'll be back up to full speed in December.”

--“Still having delayed deliveries with both overseas and domestic product. Customers still not too encouraged in increasing our sales due to uncertainty in the market and inability to get other product to continue production on a daily basis!”

--“This supply chain problem is getting old.” 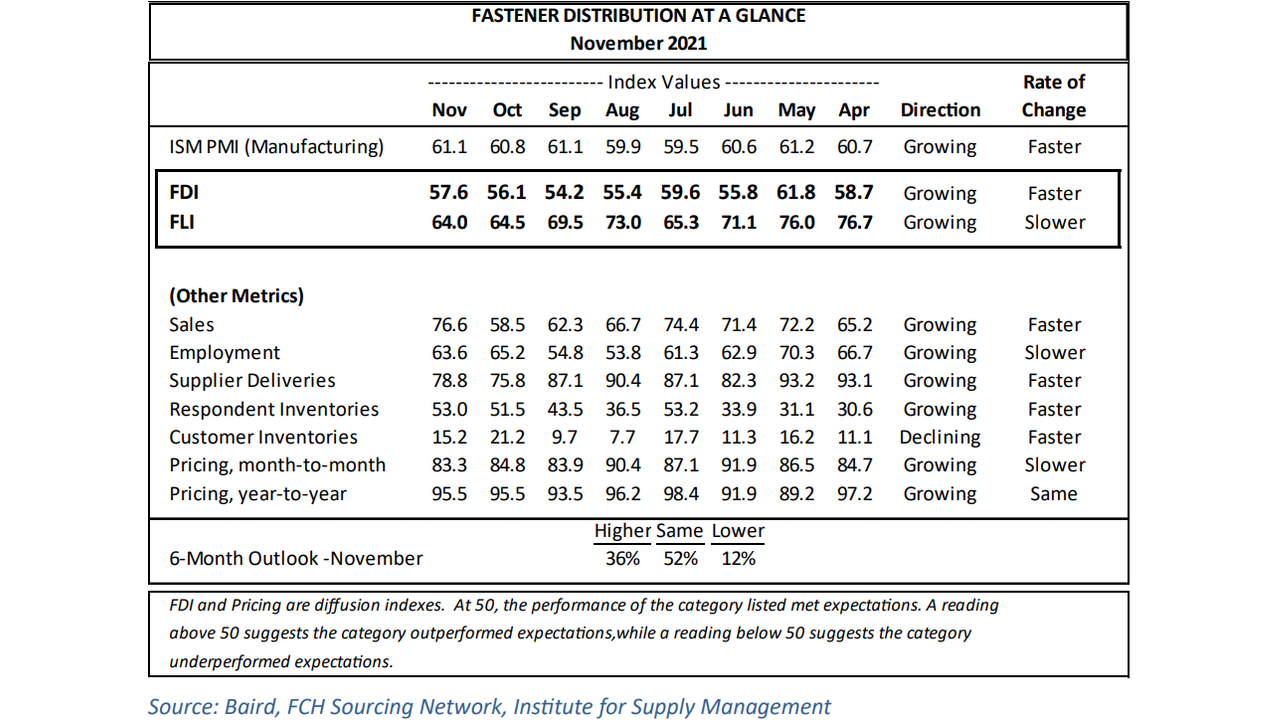