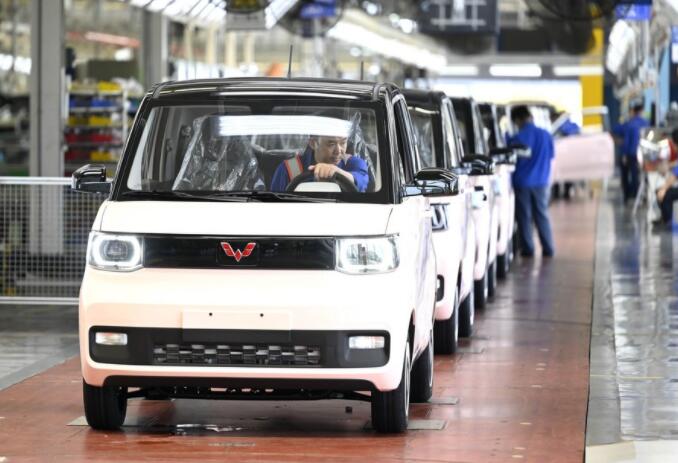 Electric cars and plug-in hybrids are expected to account for 30 percent of new vehicle sales in China in 2025, according to Zhang Yongwei, a chief expert at Chinese auto think thank EV 100.

The new energy vehicle sector is China, the world's largest vehicle market, is growing faster than expected, said Zhang in a recent interview with the Beijing News.

Deliveries of new energy vehicles soared 141.1 percent in October to 320,000 units, around 20 percent of total vehicle sales in the month, according to statistics from the China Passenger Car Association.

The percentage was just 5.8 percent in 2020, and has been on the rise since. From January to October, sales of new energy vehicles accounted for roughly 13 percent of total car sales in the country.

Zhang said electric cars and plug-in hybrids would account for 50 percent of new vehicle sales in the country by 2030, which is 10 percentage point higher than China's latest goal.

Late last month, China unveiled a roadmap to peak its carbon emissions in 2030, in which the ratio of non-fossil fuel vehicles sold in the country is estimated to reach 40 percent of total vehicle sales.

The growth of China's vehicle market is slowing down because of a high comparative base last year and the ongoing chip shortages that is hurting production globally.

But the segment of new energy vehicles has kept its momentum. In the first 10 months, deliveries of new energy passenger vehicles surged 191.9 percent year-on-year to 2.14 million.

Cui Dongshu, secretary-general of the association, said sales will rise even higher in November and December, a pattern seen in the past few years.

He expects total deliveries of new energy vehicles, including passenger cars as well as buses and trucks, to hit 3 million this year.

Currently, volume brands are seizing the lion's share of China's new energy vehicle market, a sign of their growing acceptance among ordinary customers.

Six carmakers saw their sales exceed 10,000 units in October. Tesla was the only premium brand, statistics from the China Passenger Car Association showed.

China's BYD topped the list with 80,373 units sold that month. Tesla followed at 54,391. The third most popular brand was Wuling, known for its two-seat mini-vehicles, which sold over 42,000 units.

Chen Shihua, deputy secretary-general of the China Association of Automobile Manufacturers, said carmakers are rushing to increase the number of new energy vehicle models available in the market, thus helping boost the popularity of such vehicles among the public.

"So far this year, you can rarely see carmakers launch newly developed gasoline models. Almost all of the new launches are electric or plug-in hybrids," Chen said.