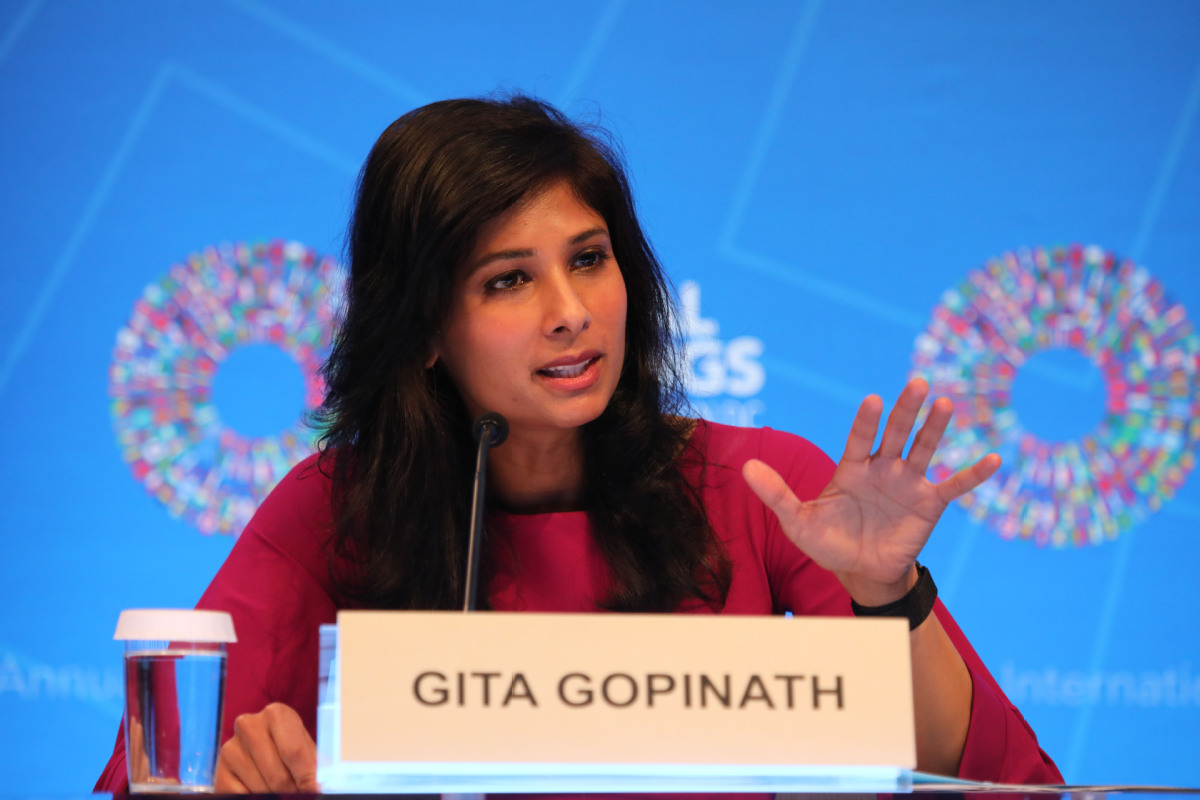 Gita Gopinath, the economic counsellor and director of Research Department of the International Monetary Fund,speaks at a news conference during annual meeings of the World Bank and the IMF on Oct 15, 2019. Since early last year, the annaul meetings and the release of the quarterly World Economic Outlook have been moved online because of the pandemic. [Zhao Huanxin / China Daily]

China's economy is projected to grow at 8.1 percent this year, built on its effective pandemic containment measures and policy support, the International Monetary Fund said in its World Economic Outlook (WEO) update released on Tuesday.

It estimated China's gross domestic product for 2020 to increase by 2.3 percent, matching the growth rate that was announced by China's National Bureau of Statistics last week.

"China has been very successful in containing the pandemic and that has played a very important role to bring back activity much more quickly," Gita Gopinath, the economic counselor and director of IMF's Research Department, said at a virtual news conference on Tuesday.

In a blog posted on Tuesday, Gopinath noted that China returned to its pre-pandemic projected level in the fourth quarter of 2020, "ahead of all large economies".

Official statistics have shown China's growth steadily picked up throughout the year. The country registered a fourth quarter GDP expansion of 6.5 percent, a sharp contrast with a 6.8 percent slump in the first quarter and up from 4.9 percent growth in the third quarter year-on-year.

"The public infrastructure spending support, and also the support that was extended to affected households and to firms, reinforced by aggressive actions by the People's Bank of China to provide liquidity support and ensure that credit provision remains strong," Nabar said at the briefing.

The 8.1 percent growth rate for 2021 was 0.1 percentage point down from the IMF's October forecast, but higher than the 7.9 percent projection the World Bank made on Jan 5.

The World Bank, in its 2021 Global Economic Prospects, said its revised-up prediction for China reflected the release of "pent-up demand and a quicker-than-expected resumption of production and exports".

Globally, the stronger-than-expected recovery in the past six months, the policy support since the end of last year, plus the vaccination efforts, have enabled the IMF to upgrade its forecasts, believing the world could achieve 5.5 percent growth in 2021 after a record contraction of 3.5 percent in 2020.

The estimate for 2020 is 0.9 percentage point higher than projected in the October WEO forecast, while the 2021 growth forecast is up by 0.3 percentage point, according to the quarterly update.

Gopinath noted that even though the estimated collapse of the world economy is somewhat less dire than previously projected owing to stronger-than-expected growth in the second half of last year, it remains the worst peacetime global contraction since the Great Depression of the 1930s.

The United States is projected to post a 5.1 percent growth rate this year, surpassing its pre-COVID levels. The growth rate is 0.4 percentage point higher than the IMF's October forecast.

Just like among the advanced economies, emerging market and developing countries are also projected to trace diverging recovering paths, according to 190-member lending organization.

"Considerable differentiation is expected between China — where effective containment measures, a forceful public investment response, and central bank liquidity support have facilitated a strong recovery — and other economies," it said.

As tremendous uncertainty remains and prospects vary greatly across countries, much now depends on the outcome of a race between a mutating virus and the vaccines to end the pandemic, which has led to more than 2 million deaths worldwide, according to Gopinath.

Confronted with an unprecedented global challenge, the international community must act now to ensure the pandemic is beaten back everywhere, the divergence in prospects across and within countries is reversed, and the world builds forward to a more prosperous, green, and inclusive future, she wrote in the blog.