The FDI — a monthly survey of North American fastener distributors, operated by FCH in partnership with R.W. Baird — showed a seasonally-adjusted September reading of 52.0, up from August's 49.2 but still down from July and June's relatively robust 54.6 and 56.9, respectively. For the index, anything above 50.0 indicates expansion and anything below 50.0 indicates contraction. Thus, September's 2.8-percentage point increase was a solid one-month improvement back into expansion territory. The FDI gain followed a modest 0.6-point decline in the Manufacturing Purchasing Managers Index (PMI) from the Insitute for Supply Management, which had a September reading of 55.4.

The biggest driver of the FDI's September gain was its sales index, which has seen major volatility throughout the COVID-19 pandemic. After plummeting 31.6 points from July to August, the sales index had a 13.2-point rebound in September to 60.

The FDI indicator for year-to-year pricing also had considerable fluctuation last month, jumping 14.7 points to a new recent high of 80.5. All other metrics remained essentially stable, staying within eight points of August's readings:

The FDI's forward-looking indicator (FLI) — which measures distributor respondents' expectations for future fastener market conditions — declined 7.5 points in September to 60.6 — its highest mark of the year — indicating an even rosier market outlook.

"Taking the FDI and FLI together, in our view, we believe this indicates September fastener market conditions showed improvement off a relatively steady August," commented R.W. Baird analyst David Manthey, CFA regarding the September FDI. "We view this breakout as a positive sign looking forward, as low customer inventories, coupled with a slightly more optimistic tone around hiring, could bode well for near-term prospects. Net, we believe the FDI should see continued modest expansionary readings in the near term."

Looking at expected activity levels over the next six months, sentiment considerably -strengthened in September: 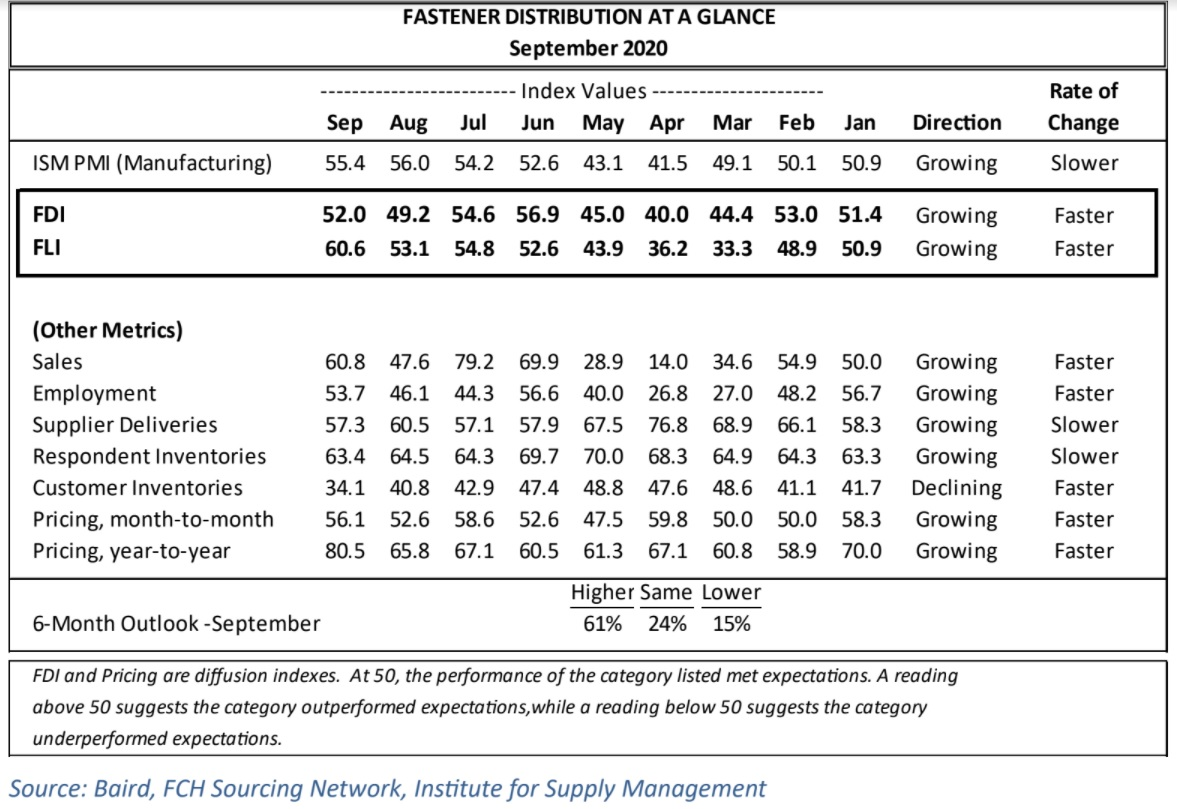