US August Fastener Distributor Index Falls Back Into Red

Views :244 Recommendation: Votes:0 Discuss:0
The index took a turn for the worse in August despite continued gains in the greater United States manufacturing sector.

After a robust June and July, FCH Sourcing Network's monthly Fastener Distributor Index took a turn for the worse in August despite continued gains in the greater United States manufacturing sector.

The FDI — a monthly survey of North American fastener distributors, operated by FCH in partnership with R.W. Baird — showed a seasonally-adjusted August reading of 49.2, following high marks of 54.6 and 56.9 in the two months prior, respectively. For the index, anything above 50.0 indicates expansion and anything below 50.0 indicates contraction. Thus, August's 5.4-percentage point decline was a sizeable one-month decline and return to industry contraction. August was still considerably better than low marks of 44.4, 40.0 and 45.0 during March, April and May, respectively — during the height of COVID-19's business impacts — but contradicted continued August gains in the manufacturing Purchasing Managers Index (PMI) from the Insitute for Supply Management, which gained another 1.8 points in August to a reading of 56.0.

The largest driver of the FDI's August move to contraction was in its sales index, which plummeted 31.6 points from July to a mark of 47.6. All other metrics remained essentially stable, staying within six points of July's readings.

"Taking the FDI and FLI together, in our view, we believe this indicates August fastener market conditions showed relative stability in trends after several consecutive months of strong month-to-month improvement," commented R.W. Baird analyst David Manthey, CFA regarding the August FDI. "After two consecutive months of fairly sharp improvements in the FDI, naturally the rate of improvement stalled some in August."

Besides the major sales index fall, three of the August FDI's six other metrics had month-to-month gains:

Looking at expected activity levels over the next six months, sentiment weakened in August: 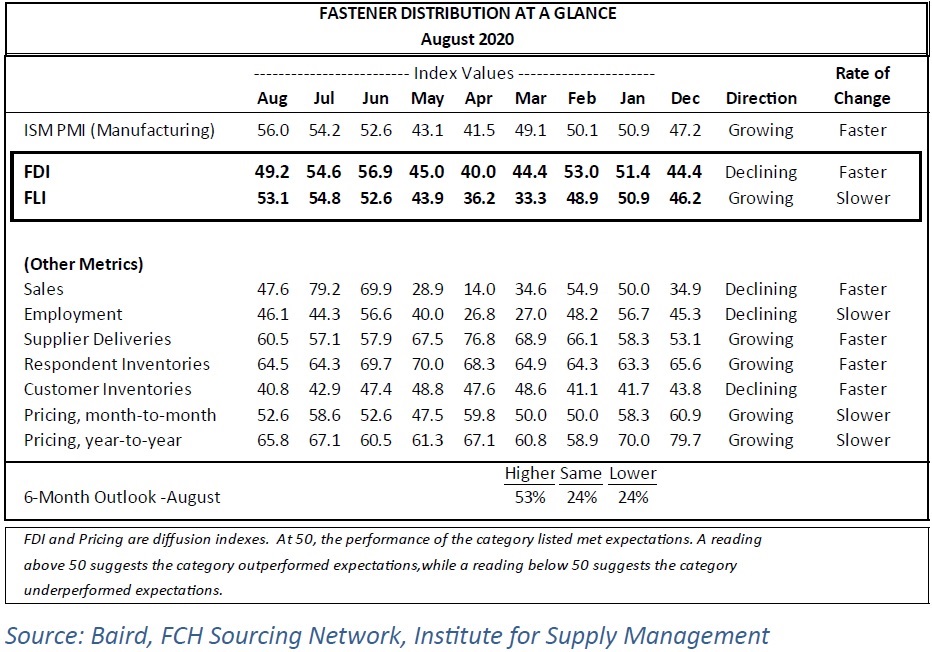