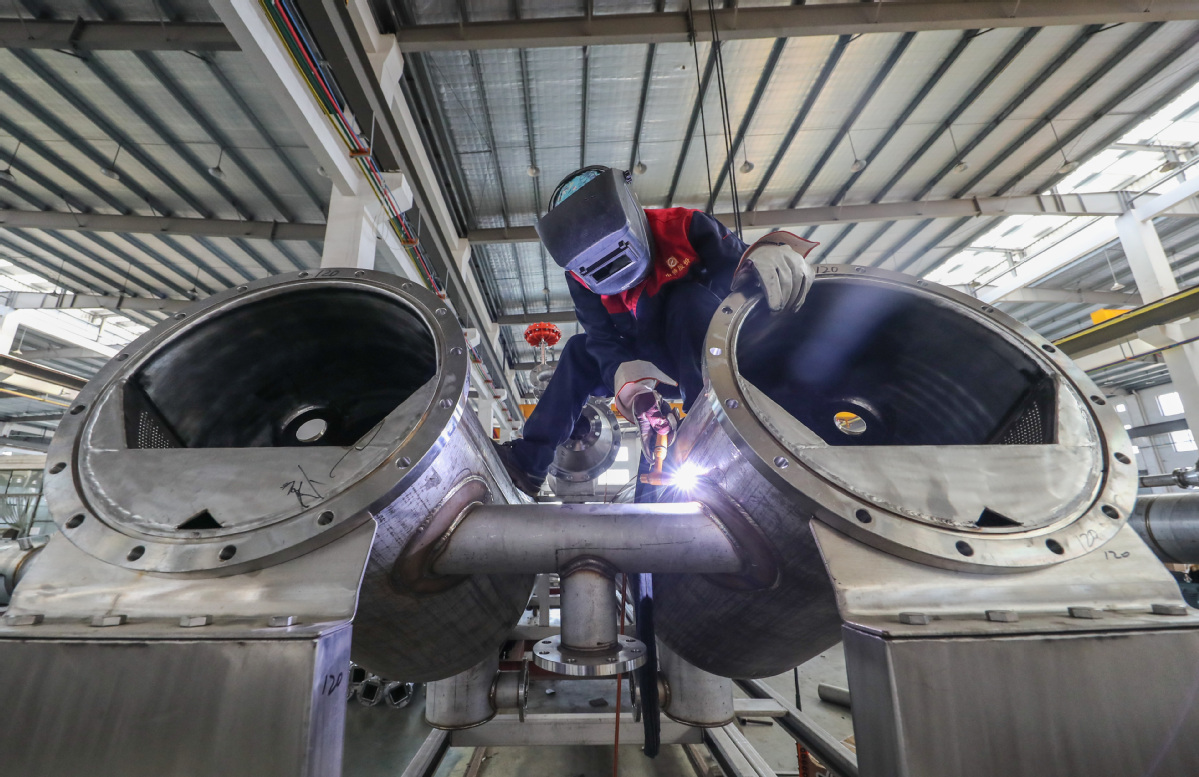 A technician works on an intelligent dyeing machine at a factory in Huzhou, Zhejiang province. WANG ZHENG/FOR CHINA DAILY

China's manufacturing sector saw its strongest expansion in more than nine years in August as production and market demand firmed up in the aftermath of the COVID-19 epidemic, a private survey said on Tuesday.

The Caixin China General Manufacturing Purchasing Managers' Index came in at 53.1 in August, the highest level since January 2011 and up from 52.8 a month earlier, media group Caixin said in a report. The reading marked the fourth month in a row for the index to rise within the expansionary territory, indicating that the manufacturing sector has recovered at a continuously quicker pace. A reading above 50 indicates expansion, while one below that reflects contraction.

"Manufacturing demand and supply were both robust, while overseas demand has started to pick up," said Wang Zhe, a senior economist at Caixin Insight Group.

In August, the subindexes for output and total new orders hit their highest levels since January 2011, while the gauge for new export orders entered the expansionary territory for the first time this year, mainly due to a slowing spread of the pandemic overseas, the report said.

In anticipation of a sustainable recovery in demand, manufacturers increased their inventories of finished items for the first time since April, though slightly.

Some companies have even started to increase recruitment to meet rising market demand last month, pushing the sub-gauge of employment to the highest level this year, albeit still within the contraction territory.

"Companies' future output expectations remained strong, reflecting a positive outlook for the manufacturing sector for the year ahead," Wang said.

But the elevated uncertainties such as the global pandemic situation and the China-US trade row could limit the strength of recovery, while more efforts are needed to help small and medium-sized manufacturers, especially those in the middle and western regions of the country, they said.

Wang Tao, chief China economist at Swiss bank UBS, said the manufacturing sector is set to stay within the expansionary territory in the rest of the year but the expansion could lose some steam on a month-on-month basis.

"Unlike in the second quarter when business activities restarted after the lockdown and led to strong month-on-month recovery, the economy has now largely got back on the original growth track, leaving room for further monthly improvement limited," she said.

Despite that the recovery could moderate, the Chinese economy is expected to record a year-on-year GDP growth of between 5.5 percent and 6 percent in the second half of the year, remaining a major engine of global recovery, she said.

The official PMI for the manufacturing sector edged down to 51 last month and indicated a slowdown in expansion, in contrast to rise of the Caixin PMI, the National Bureau of Statistics reported on Monday.

Wu Chaoming, deputy dean of the Chasing Institute of Chasing Securities, said the divergence came in mainly as the NBS polled manufacturers across the nation while Caixin focused mainly on the eastern coastal parts.

The floods along parts of the Yangtze River, with the central and western regions of the country hit the hardest, have caused difficulties in business operation of SMEs in those areas, which may not be fully reflected in the Caixin report, Wu said.

Some SMEs in the manufacturing sector may still face acute difficulties, such as lukewarm demand, financing woes and the floods-related disruption, Wu said, citing that the official PMI for small manufacturers dropped to 47.7 last month from 48.6 in July.

He called on strengthening targeted fiscal and monetary support for SMEs, deepening reforms in the financial sector to better serve small business, like promoting the development of supply chain finance.