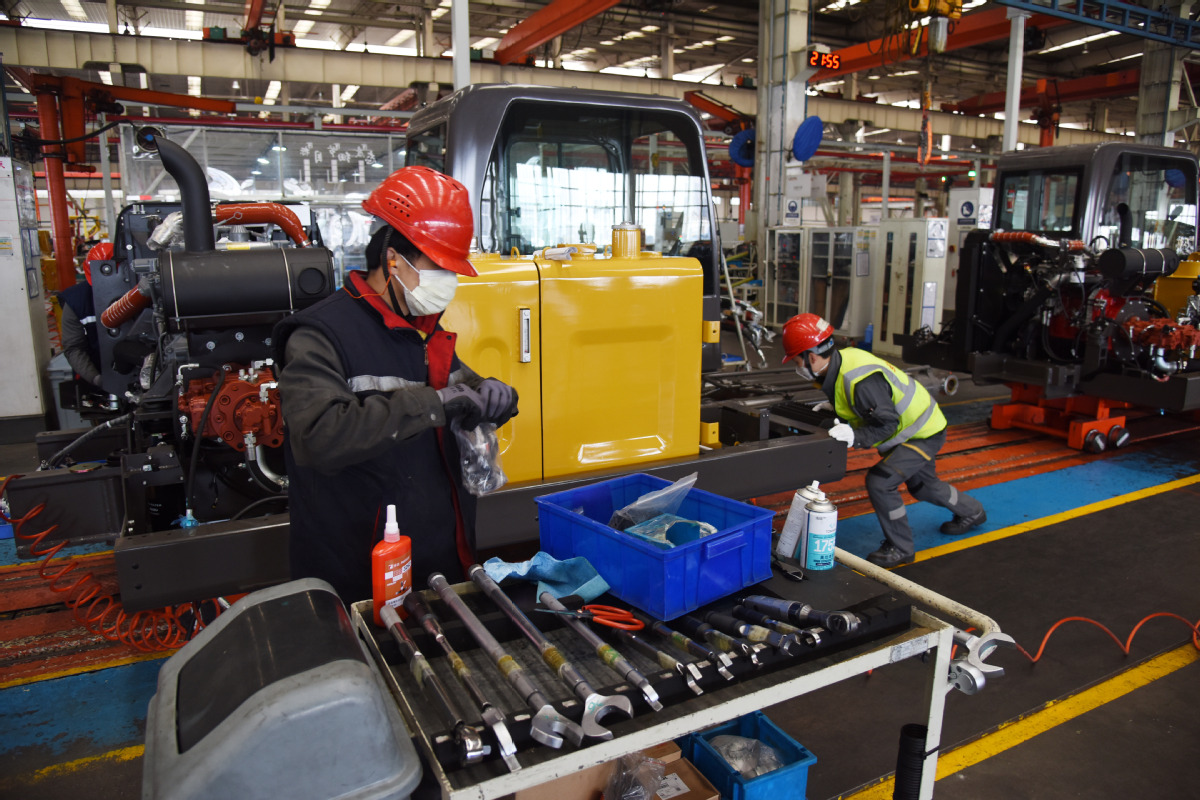 Employees put finishing touches on an excavator at an assembly line in Qingdao, Shandong province. [Photo/Xinhua]

China's sales of construction machinery, especially excavator sales, witnessed rapid growth between March and May thanks to surging demand from the domestic resumption of the nation's economy, industry experts said.

Data from the China Construction Machinery Association showed that in May, China's sales volume of excavators reached 31,700 units, up 68 percent on a yearly basis. The sales volume totaled 49,400 in March and 45,400 in April, setting a new monthly high for March and the second highest for April.

"The rebound of excavator sales in March was unexpected and the growth momentum continued in April. This showed that the construction machinery industry has walked out of the haze of the COVID-19 pandemic and is welcoming a peak season. The excavator sales volume for the whole year is expected to see 10-percent year-on-year growth," a report from AVIC Securities said.

Another report from Essence Securities noted that at this time, the industry has turned for the better in its development stage. Various construction machineries are in short supply.

Thanks to the continuous increase in counter-cyclical policies, infrastructure investment is expected to remain in an upward trend and this will result in further boosting the industry.

Though many industries were hit by the COVID-19 pandemic, infrastructure projects across the nation, such as China State Railway Group Co's continued network expansion, will effectively support the sales of domestic construction machinery firms, said Qi Jun, president of the China Construction Machinery Association.

This would bring most of the companies better sales in the second quarter of this year, Qi added.

Construction machinery maker Sany Heavy Industry Co said that between January and April, the group's sales revenue and profit hit 38.3 billion yuan ($5.4 billion) and 6.4 billion yuan respectively, which were slightly higher than the level in the same period last year. Its sales revenue is estimated to grow by 40 percent year-on-year in May.

At Sany's industrial zone in Changsha, Hunan province, the assembly lines of various construction machines have been running at full capacity, with many orders scheduled in the second half of this year.

At its industrial zone in the Lingang New Area of the China (Shanghai) Pilot Free Trade Zone, excavators are being assembled at the speed of one per five minutes.

The production and sales volume of products including excavators and pile machines reached 10,342 and 10,994 respectively in April, breaking a monthly record, the company said.

"Currently, we are running at full capacity. Thanks to the digital industrial chain platform, we managed to find more than 1,000 suppliers for resources sharing such as employees, raw materials, and logistics among others to guarantee smooth production," Huang Min, vice-president of Guangxi Liugong, told the People's Daily.

Fang Jianxian, general manager of lmjx.net, the official website of the road machine chapter of CCMA, said the rapid growth in excavator sales between March and May should be attributed to the resumption of construction, which boosted the demand for machinery equipment.

However, the growth rate of excavator sales is expected to slow down in the second half of the year as the surge in demand will ease. The year-on-year growth rate though is estimated to hit between 10 percent to 15 percent.

"The reason behind the growth is that the government's tone for increasing infrastructure investment throughout the year will not change, and the excavator updates brought by environmental protection policies are also accelerating," Fang said.